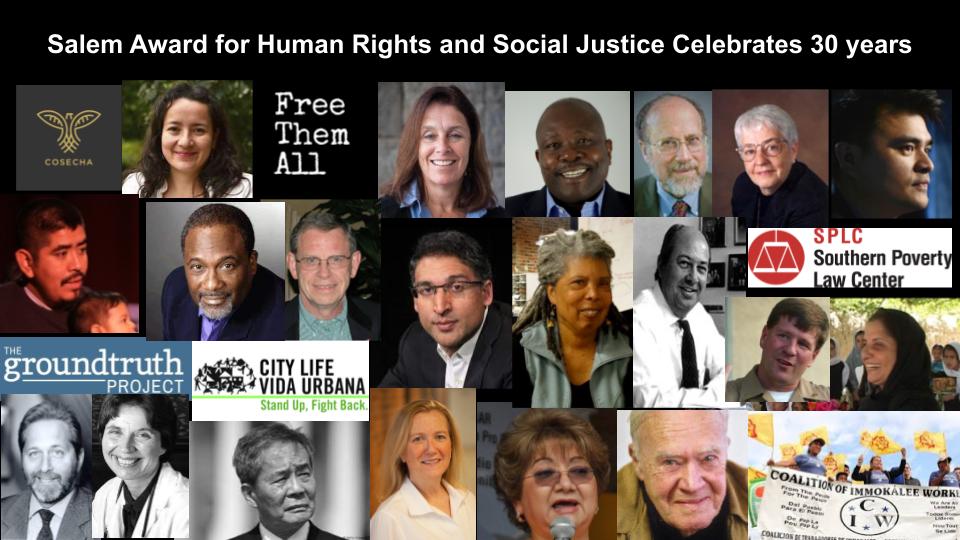 You may or may not recognize all the names and faces above, but there are countless people doing important, and often unheralded, work under the human rights and social justice umbrella.

Many are committed and working in their own way on behalf of others. Twenty-four of them have received the Salem Award, including Dr. Jonathan Shay, Jane Elliott, and this year’s winner, The Ground Truth Project.

Now is the time to ask: Who is your hero? Whom do you know (or know of) who deserves the Salem Award? The SAF welcomes nominations from anyone. Who is a good candidate? Any person or organization whose work is aligned with our mission:

To keep alive the lessons of the Salem Witch Trials of 1692 and to make known and honor the heroic work of those who speak out and take action to alleviate discrimination, promote tolerance, and achieve justice for contemporary victims of social injustice.

They may be working both here and in their homeland for the rights of women and girls in Afghanistan like 2004 recipient Fahima Vorgetts.

Who will be honored next? It is up to you.

The Salem Award for Human Rights and Social Justice is awarded annually to an individual or organization that meets criteria established by Voices Against Injustice.

Nominations must be postmarked or electronically dated by February 15th, 2023 in order to be considered for receipt of the 2023 Salem Awards for Human Rights and Social Justice.