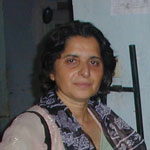 Fahima Vorgetts grew up in Afghanistan. From an early age, she has been working to improve the position of women in Afghan society. While in graduate school in Kabul, she was director of a women’s literacy program. In 1979, Ms. Vorgetts, then 24 years old, fled Afghanistan during the Soviet invasion. Eventually she came to the United States, married an American, and is raising her family in Maryland. She remains a Muslim.

It is her memories of her early years that prompt her to dedicate her life’s work to improving the plight of women in her native country. In her own words Fahima says, “Afghanistan haunts me. It is my country, and my heart breaks for my sisters who undergo daily oppression and hardship there. My passion and life’s work is to reclaim and rebuild the country so that women can be free and equal, and can live a life of dignity, literacy and financial stability.”

As part of her long-term commitment to the women and children of Afghanistan, Fahima raises funds through speaking engagements and sales of Afghan handcrafts. Several times each year Fahima travels to Afghanistan. She has opened new schools for girls and literacy classes for women. She has created income-generating projects for widows, helping them become self-sufficient, and arranged for the shipment of medical supplies to Herat’s women’s hospital. She has distributed warm clothing and school supplies to refugees in Afghanistan and neighboring Pakistan. Her efforts have touched the lives of thousands of women of all ages and ethnicities.

Fahima has addressed the United Nations and traveled widely speaking to university conferences and religious organizations. She has appeared on many national and international television and radio stations, including BBC and NPR. She has been featured in articles in the Baltimore Sun and the Washington Post. She served as a consultant for two books dealing with Afghan women, Women For Afghan Women: Shattering Myths and Reclaiming the Future, edited by Sunita Mehta and Behind the Burqa, by Batya Swift Yasgur, a memoir of two Afghan sisters.

Ms. Vorgetts is currently a board member of Women for Afghan Women1 and director of the Afghan Women’s Fund. She is also an honorary member of Afghanistan Organization for Human Rights and Environmental Protection.

Fahima is the winner of the Lifetime Achievement Award for “Extraordinary Contribution to Peace and Justice” awarded by the Ann Arundel Peace Action Organization in 2002. In December 2003, she was awarded the “Human Right Community Award” by the UN Association of the National Capital Area. In September 2004, she received “Most outstanding volunteer” award from Ann Arundel County.